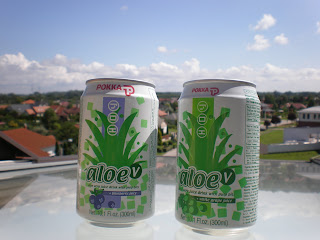 My life changed about a year ago. I was out in the 'burbs of Singapore in the midday heat when I walked into a store. I was looking for a beverage that could replenish my fluids that had been displaced by the tropical humidity. I looked in the fridge once, I looked twice, and on thrice glance, I saw a white can with dashing decals of purple and green. This I thought, was the beverage for me. I paid the petty fee, and lifted the aluminum key. The can purred at me and I silenced it with my lips. As the soft residue acquainted itself with my mouth, seduction was consolidated the gentle aloevera pulp lofted around the cavities of my mouth. Thou had found love.

As with many romances courted abroad, AloeV and I parted ways. A year and four continents later,  my journey led to me Spar Tiszaujvaros, where a keyhole of light shone down upon on a row of Aloe V's in the beverage aisle. Again I paid the petty fee, and was reunited with this can of joy once more.

Long live Spar Tiszaujvaros, the only other know stockist of AloeV apart from Jurong East petrol station :) If anyone else has had a similar courtship with this wonderful beverage, share your passion in the comments below!
Posted by Josh Amberger at 12:11 AM No comments: 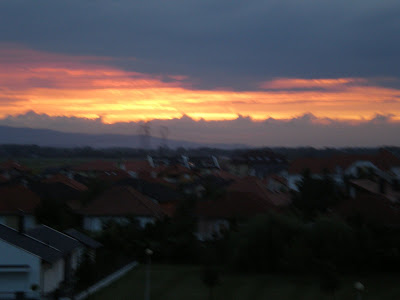 So a twist of fate has seen me relocate to Tiszaujvaros in Hungary, the location of my next race in 2  weeks time. Unfortunately I am yet again by myself, but I have always been one to say that I only really feel lonely around people. Being by myself is not such a big thing for me, I have been by  myself, funded myself and coached myself for almost the entirety of this journey, and regardless of outcomes, I have come to realise I can only really count on myself to get the things I want most (noteable exceptions know who they are). I recently just finished my last uni exam, which I was very pleased to do. It however came with a $250 price tag (off campus fee), so thanks to uni for screwing me on that one. I was hoping that I could return to Team Witten in preparation for this race, but this became untenable after the team demonstrated to me that they care more about their pockets than the athletes that ultimately line their pockets. I am however very happy to be in Tizy, a town that is spoken about a lot in the triathlon community. With the support of the Markus family, I feel like I can actually now concentrate 100% training and racing, the two things that are such a big part of my life.

The blog has been quiet, but I have been doing some hard work out on the front of Busto Arsizio. Huggie and I took back Busto this morning like the great Allied Expeditionary Force circa WWII with our Busto Build. Have a look at our session here :)

Josh
Posted by Josh Amberger at 8:45 PM No comments:

So I have done 6 races in 9 weeks, and my body is ruined. A lack of continuity in training and a lot of travel has definitely taken its toll, and I unfortunately fell to the sardonic wrath of Mr. Pain in Holten. He was delivering servings of his finest the whole race, and he was serving it cold. All three legs of the race were painful. I however managed to secure myself a break in the last lap of the bike, and got into transition 30seconds up on the group with comrade Brendan Sexton. Our little gap didn't last long though. Overall, a race to forget. Holten was very nice though, it's a little country town of 9,000 in the Northern parts of the Netherlands. We were staying in isolated bungalows out of town, and we spent a lot of time outside just relaxing and unwinding. The Netherlands is a country everyone needs to visit :)

I can now look forward to a month without racing, and I can concentrate in my first real block of training since I left Oz 10 weeks ago.  I have learned a lot about my body in this short time away from home, and I already have one eye on next season thinking about changes I can make as a result of this experience.

Next up is the Tiszaujvaros World Cup in Hungary on the 8th of August! In the meantime, lots of training (and some study) at my new base here in Busto Arsizio in Italy. 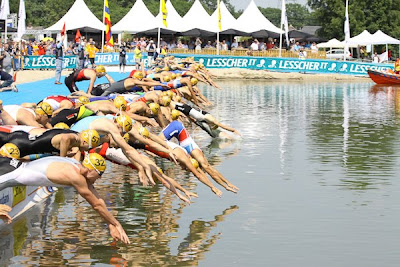 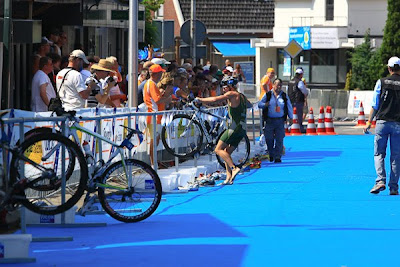 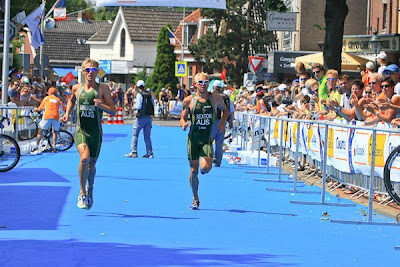 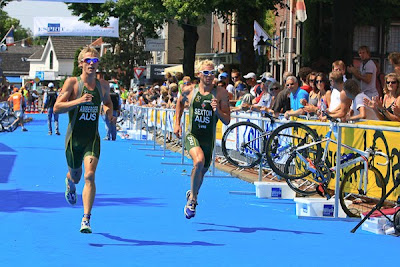 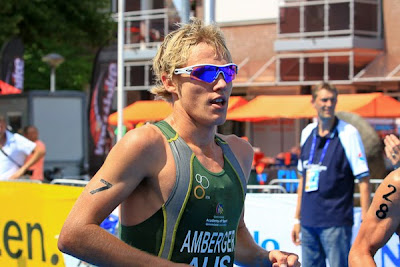 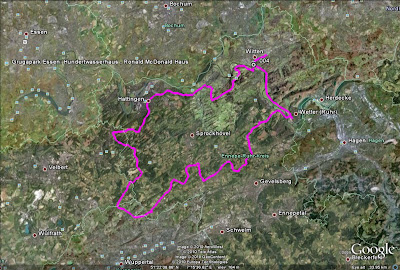 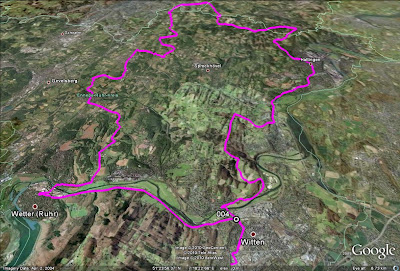 Google Earth- a tool for cartography, but also a tool for well, wasting time. Here's a loop I did back in Witten last week, an aerobic 80km over a few hills! It might not look like much, but there's a few hours there :)

Posted by Josh Amberger at 12:43 AM No comments: 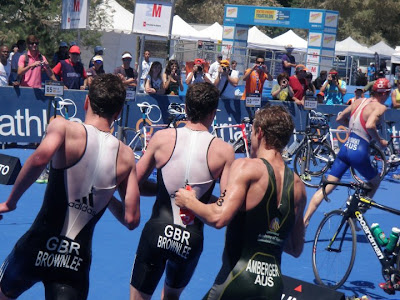 In other news pertaining to placement and geography, I'm currently enjoying my last few sessions in the great Witten Germany before flying out on the 4th to Varese in Italy. I will be setting up a new training base with a whole bunch of other young Aussies, with some fresh from the homeland, and lesser fresh souls who will be migrating from the Spanish basque. I will also be heading back to the Netherlands next weekend to race in the Holten World Cup.

Good times Witten, see you again soon :)
Posted by Josh Amberger at 12:20 AM No comments:

On Sunday I raced the ^^^ in Belgium. I was very much anticipating this race as I knew I had form, but just needed to prove it. There was an interesting start list which was charged with young talent. Slovakian swimming phenom Richard Varga had my interest for a fast swim, as well as Frenchies (both Junior World Champs) Vincent Luis and Aurelien Raphael, Kiwi Dylan McNiece, Dustin McLarty etc etc. I knew there was a good making for a break on the bike. The field was balanced by a juggernaught of crazy young runners, namely Etienne Dienmunsch, Miguel Fidalgo, Mattias Zoell, Brendan Sexton and a few others. I knew no matter what happened it was going to be tough!
The swim turned out to be slower than I expected, but we managed to get a tight little group away with all the usual suspects. The course was dead flat and we were hitting 52km/h on a few of the straights. We were working well, but a few of the guys starting to look at each other and our group slowly fragmented. All the hometown Belgians in the chase group looking to impress onlooking females made sure we didn't stay away, and we were caught by 20km in. I then missed a small break, and consequently spent the rest of the ride trying to motivate the pack to do some work and chase them down. By the end of the ride, we had given 5 athletes a 2 minute advantage going into the run, which pretty much meant we were now racing for 5th at best. Meanwhile all then sick runners were getting closer and closer to the back of our group. Onto the run, it took me 5km to find my legs, but eventually got them going and picked up (or saved) about 10 places in the final few kilometers. I finished 11th, a few seconds outside the top 10. I was hoping for a better result, but I was somewhat happy that I was actually able to run to my potential in the final 5km. I splitted 30:40 on a 9.6km course, so I'm happy with a sub 32min 10km. Dienmunsch (2nd place from the 3rd pack) from France showed his class with a 28:28 10km, which I guess really needs to be seen to believe. The guy was insane, so kudos to him. Also kudos to Aurelien Raphael for taking the win from a gutsy break on the bike. 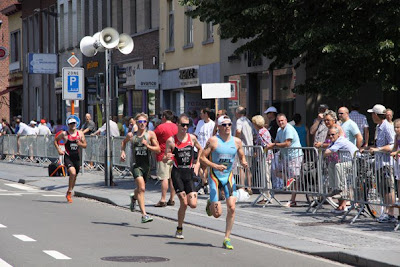 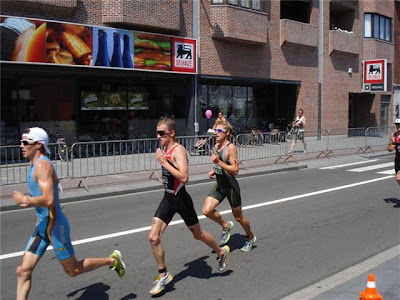 After the race I traveled back to Veldhoven in the Netherlands to rejoin some family, and spent the Monday cruising around with Don my Uncle in many of his cars, drinking Belgian brews and playing with his overly energetic labrador. When you go out with my uncle, always expect to drink a little more than you anticipated, and watch out for 'tripel' beers, which believe it or not are triple strength. Many good times are to be had with this man, and in this wonderful country. 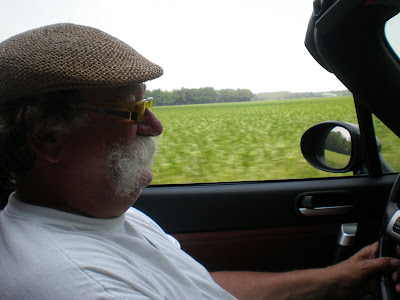