Can be read here http://www.slowtwitch.com/Interview/Travels_with_Josh_Amberger_2956.html

Thanks to Timothy Carlson for the interview & the photos! 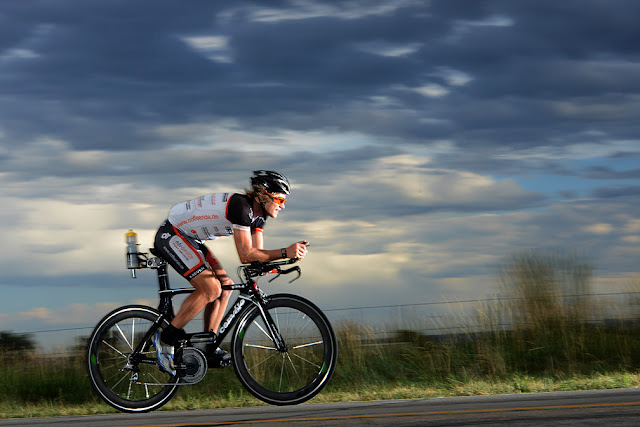 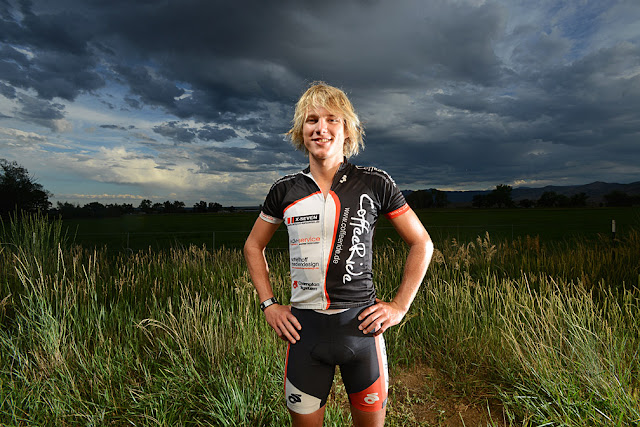 I'm not often I'm contacted by anyone outside my family & friends circle, but here's some text I received from a lad called Joseph down in Tampa FL this week. Unmanipulated, as follows...

No problem with the comments mate. You deserve every one of them. I'm on business in Panama City, FL this week. Got a chance to swim and run on the IMFL course through St Andrews State Park as the sun was setting over the sand dunes. Absolutely stunning views! Was pretending I was Ronnie Schildknecht as I ran the course and thinking about him breaking the 8 hr mark for a full IM last November on that course! Then I said, forget that crap, you're Burgzzzz dude, and then my cadence immediately picked up and I left Ronnie in the dust! Seriously though, I want to thank you because you have helped me improve in the sport and you don't even know it. This sport is just my hobby but it has changed my life. I did my first triathlon in the summer of 2010 as an overweight couch potato at 6' and 205 lbs. Now, 2 years later, and 8 triathlons under my belt, I'm down to 175 lbs and still 6'. Ha, gravity hasn't diminished my height just yet, but it's giving a go at it for sure. I've been able to string together 2 consistent years of training and have seen the improvements. My allergies are gone now, I don't get sick anymore (knock wood!), and I feel so much healthier.

Now you have motivated me even more and I want to thank you! You just don't know how much it means to me. I'm a slow poke, but I'm having so much fun seeing my improvements, watching my body change (I just got another new vein popping out on the front of my shin! Yeah baby!), and attacking new challenges, such as the 70.3 distance. I love one of Josh Cox's (American record holder in the 50K ultramarathon distance) quotes that has really stuck with me and that is "do the thing you are not sure you can do." This doesn't imply a lack of confidence, rather I see it as always trying to go bigger and leaving the status quo in the rearview mirror at home with the wimp dogs.

Thanks for following me with my Pocono race. It really shows your character, another attribute of yours that has attracted me as a Mad Fan. As you become the next Crowie, don't let it change who you are, as I know you won't. Stick to your character and your morals. They say way more about a man than any worldly accomplishments. Amen bro? No matter what becomes of your career, just know that I will always be a Mad Fan.

Three races, three second place finishes. I remember this sort of stuff happening to Bevan Docherty in his consistent days circa '08, or in more modern times (sorry Bevan you're old) & taking in a broader demographic, everyone finishing second to A.Brownlee. Nevertheless, if I can keep this up and finish second in my next two races, that will mean I will be bringing home some HyVee & Las Vegas bacon, which as it happens, promises to be some super fine and luscious bacon.

There was a lot of drama surrounding Muncie last weekend (see most US based Tri forums) because the Indiana vastland was bulk serving record breaking temperatures. The race organisers made the call the day before the event to shorten the 70.3 to something just above Olympic distance (1600m, 48km, 10km). I was somewhat disappointed because I had gotten myself mentally and physically ready for a 70.3, treating the Berlin 5150 six days before as just a warmup. I know I need more practice at the distance for Las Vegas 70.3 Worlds, so it would have been nice to do the full race. Though at the same time, I knew the shortening of the race gave me a small advantage over the regular long course guys competing, but at the same time it pitted me against one of the best short course athletes ever, Greg Bennett (half Aussie, half Yank, full traitor, just kidding Greg). I didn't complain, and was just keen to get the race underway to test myself! Best on the day right?

The water at the reservior was a nice warm broth of 32 C or 89 F, but I hacked it out and led the swim by just over one minute to mentioned old hat GB. I somewhat felt before the race that the winner would come from either of us. My chances of this however somewhat diminished when I stupidly took a wrong turn on the bike about 1km in because a police car was blocking the course. I kind of knew I was going the wrong way, which makes me sound really dumb for doing it in the firstplace, but without a lead motorbike youn can never be too sure. I fixed myself however and probably lost a good 30 seconds straight up. I continued to hold a nice lead on the bike through 'till 40km, but it was this point where I saw Aussie strongman Christian Kemp & GB slowly pulling me in. Once they were about 100m from me I sat up and decided to sit in and wait for the run. I'm really happy with my riding this season, I can say that most of the big miles I've put in have paid off, so hopefully some good wire to wire performances are coming.

In Singapore 70.3 I predicted that the run would be between Kemp and I to the line, and because he's got some fast feet I also thought he would be running well in Muncie too. While I would try to run with GB for as long as I could, I knew second would be between CK and I. Though like Singapore, CK was off the pace and left GB and I to battle off the front for the win. Though on the sharp Muncie rollers I wasn't much of a match for Greg, and he took the crown from me by 1.13.

So second is ok! I banked some spending money & secured my spot for Las Vegas. Now it's time to get back to some long miles and cough up a lung in the hypoxic town of Boulder CO. Cheers

(apologies for the bad pictures)

Historical metaphors reigned supreme on Sunday, with the East overpowering the West in taking victory in Berlin. With this somewhat crude dip of the hat out of the way, I was beaten to the line by Filip Ospaly who took his third victory this season. It's not hard to tell this guy is in hot form this season so I didn't feel too bad about it. On the other side of me in third was 2008 Beijing Olympian and local hero Christian Prochnow.

The day started out at the reasonable time of 8am, and we swam a 1 lap 1500m swim in the Spree River, and symbolically crossed over the markings twice between East & West Berlin. My plans were to race hard off the front, so I took the lead in the swim and tried to put down some pace. We found ourselves swimming an 800m or so strech up river and against the current, which made it hard to separate myself from the few guys swimming on my feet. I managed to keep the pace going and led out of the water with a few atheltes in tow.

Feeling good at the start of the cycle I laid down a bit of power and separated myself from the rest of the crowd, and managed to get just over 90 seconds on Ospaly by the end of the bike. I knew to win with only 90 seconds over this beast was going to take a huge effort & even a low 33minute split couldn't keep him off my back.

It would have been fantastic to take the Berlin title, but I raced with no taper & still managed some pretty quick splits. So while I'm happy with this, I'm still searching for my second win of the season. I'm feverishly writing this report up before Muncie 70.3 tomorrow, so hopfully I can find a win here this weekend. I can feel it's getting closer!!!

So... a fantastic 5150 event in Berlin, which is by far one of the coolest cities I've travelled to. Definately coming back to Berlin in the future & a recommended event to all. 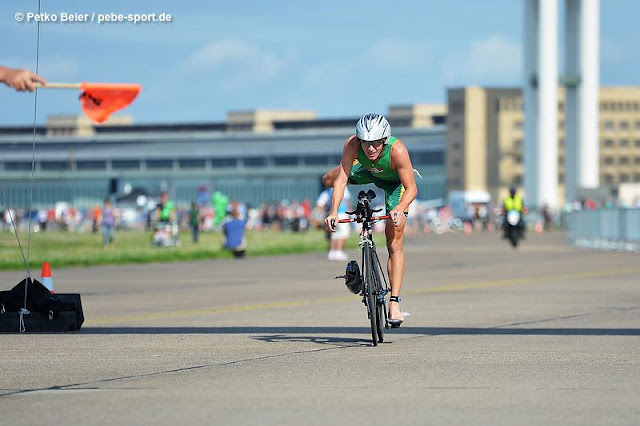 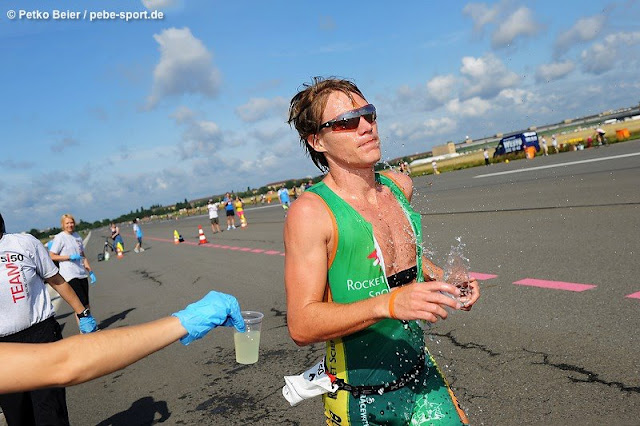 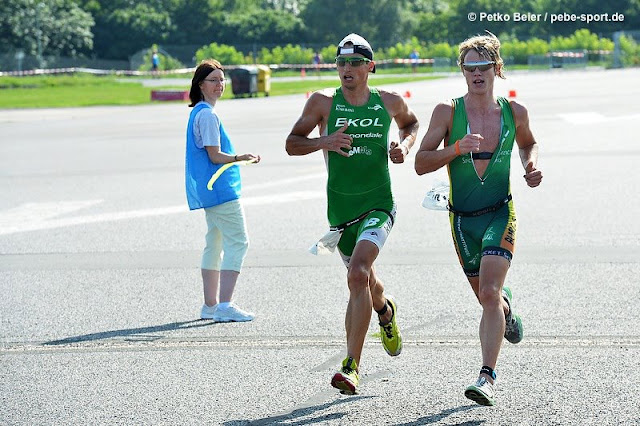 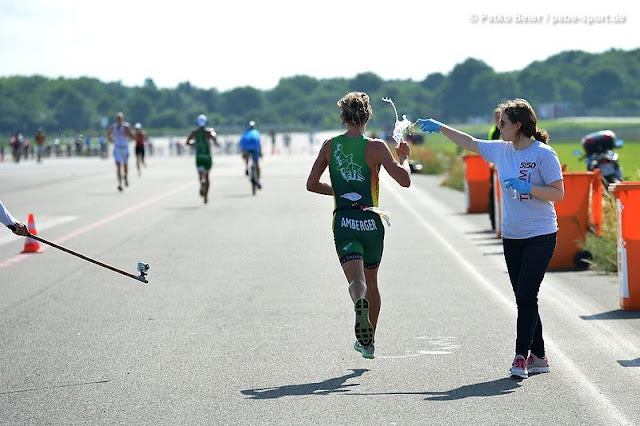 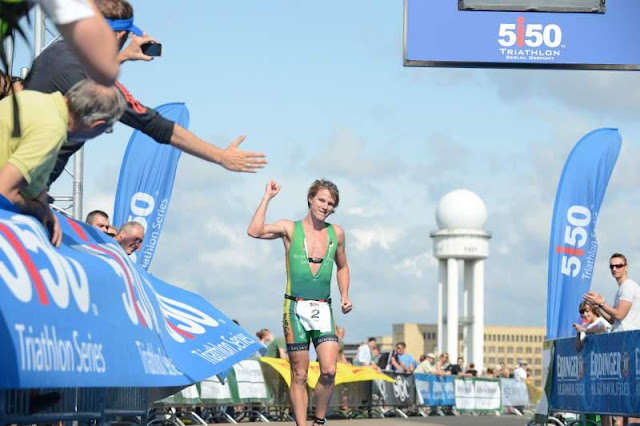 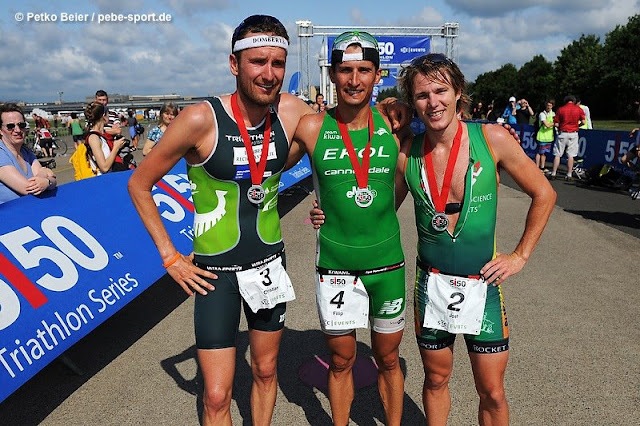