So it seems I have become unfamiliar with this blogging interface & the prose of the English language, so excuse me while I reacquaint myself after a long absence! It's been that long that I have actually written this blog 100 times in my head, and also forgotten it 100 times over. So without further delay, let's get to the nitty gritty!

The skinny on my injury was that I was diagnosed with a minor stress fracture in my proximal fibula (just below the knee) on week 6 of a 6 week training block. At the end of the week, I was supposed to fly to San Francisco to compete in my season opener at Escape From Alcatraz (won by Spanish amigo Javier Gomez). I was also going to press on to Puerto Rico two weeks later to race the San Juan 70.3. The injury was a big blow for me. I was training & recovering very well, so when the fracture happened literally overnight it was a huge shock. It was going to be amazing to test myself & my form against Javier, and I had organised to meet a couple of my new sponsors over there. In short, a great opportunity missed but I had to focus on getting my season back on track.

When the fracture was diagnosed exactly 10 days before the race in Alcatraz, opinion amongst the medical staff was that there was a chance I could still race, but that I had to avoid running up until the event. The nature of the fibula bone such that it is relatively unaffected by weight bearing compared to the tibia, & that it's function is geared towards anchoring supporting muscles & neural structures (I'm not Pro as this stuff so please forgive me if you're slapping your face right now). So ultimately it was theorised that it was a low grade fracture in a non-weight bearing bone, allowing me to have a minimum of two weeks off, that I could race if I chose to, and that it would be a maximum lay off time of four weeks. I could do normal swimming & cycling around this.

With the advice given to me, I chose not to race Alcatraz & San Juan. It was very early season (& still is), and if I didn't let it heal properly I was worried that it could plague me all year. I opted to take the maximum healing time of four weeks off so I could give myself the best chance for the season. The first week off was tough on the mind. I had planned this as a recovery week anyway so it suited, & I really didn't do much at all. The next weeks were okay, I got plenty of cycling in & I was riding up to 24hours a week. I thought that I may as well keep consolidating my base training! Eventually, the end of week four rolled around & I was pretty eager to get out for a run.

I started out very slow & very short. My first run back was only 5 minutes long. I waited two days and then ran again for seven minutes. Both of these runs were pain free, but the day following my second run the pain returned. I was freaking out & could see my season disappearing before me. I assumed the worse, that I had reopened the fracture. I was even thinking about places to disappear on a solitary holiday too... it was a very bleak feeling! I restarted the process of consultations & I saw an entire new team of therapists. Experience in the past tells me that if any advice from professionals doesn't work the first time, it's not going to work the second time. My prescribed four weeks of 'just rest' wasn't going to heal my injury!

I went and saw Ashley Mahoney (super podiatrist), who actually fixed my previous injury to my achilles two years earlier. Basically we've both concluded that if I get injured again I'll just go straight back to him. This guy is simply amazing. Over an hour long consultation (in a park at Burleigh Heads, how cool) he diagnosed the cause of the injury and mapped out a plan for recovery. Essentially, my peroneal nerve and surrounding soft tissue was brutal tight and my fibula head was locked up in the knee capsule. This was all new to me, none of my previous therapists had thought to check this out. So while I had done the rest, and the bone had healed in this rest period, the root cause of the fracture remained. Ultimately, all I had to do was work out this tightness, release the capsule & I would be sweet. After hearing this is was simple,

Within two weeks of seeing Ashley I had run a 20km week. The next week I ran 32km, and the following week (last week) I ran 50km. There has been no hints of pain and I'm well and truly on my way back to race capacity & full training volume! :) :) :)

So this all brings me to my next event & new season opener, the St. Anthony's 5150 in St. Petersburg FL this weekend. I left Australia a couple of days ago and will now be in the US & Europe until later September. I'll be backing up next weekend with St. Croix 70.3 too.

I'll write another blog in the coming days with my feeling about the race, and my path for the months ahead. Thanks a lot for reading!!!

I have since had a hair cut 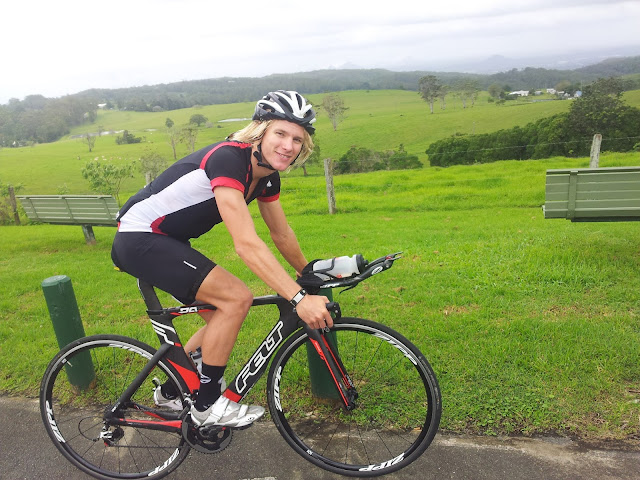