This race wasn't on my calendar early on in the year, and I didn't really intend to jump in 70.3 racing so fast. That all quickly changed when I won the Singapore 70.3 back in March, and my success there left me complusively wanting more 70.3 pie. There were a few things that drew me to compete: I hadn't contested a World Championship since the Gold Coast ITU World's in 2009, it's a notoriously hard & hot course, it was optimally placed one week after my season A-race in Hy-Vee, & I just love hurting in a sick kind of way. Someone once told me Ironman gets addictive, & I can believe them now. 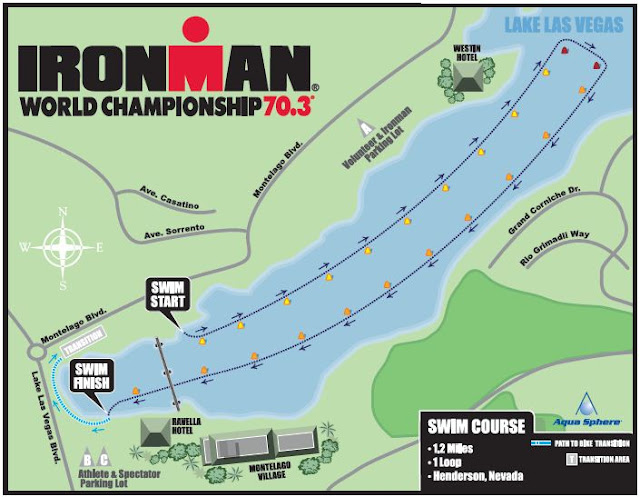 The swim course was a little too easy.  Only two turning bouys means the swim will be bunched up for most of the 1,900m. If this was changed (which it really can't considering the shape of the lake), the swim would be a little more significant and spread out. 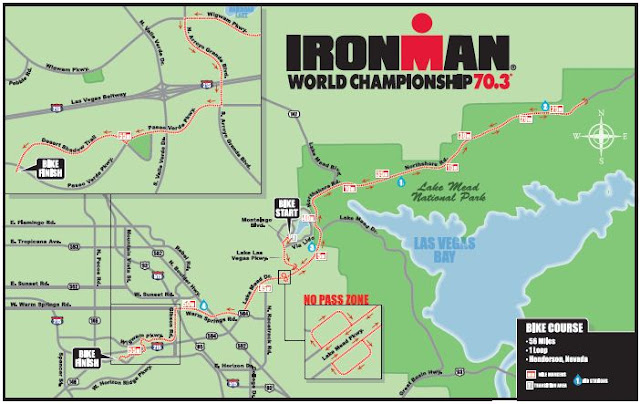 This is one of the best bike courses going around in Triathlon, though not looking like much on the map above. Entres of hills, scenery and pain is served constantly throughout the 90km, and there's never really any section to get comfortable. The road is also smooth and nice to ride on...bonus. My Garmin file is below, but still with no special power meter or anything really of interest other than speed, elevation & time etc. 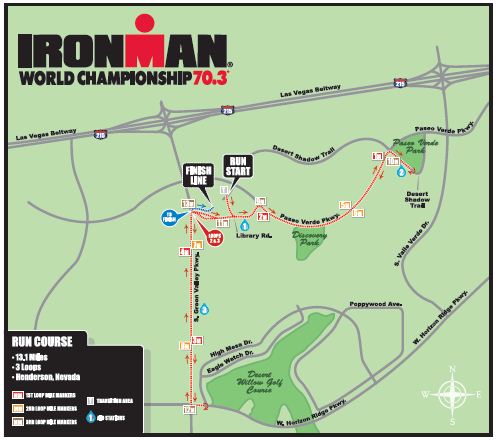 A glance at the profile above confirms that this course raises more than my girlfriends special banana bread. There's uphills, downhills, footpath switchbacks & u-turns. This makes for a long, slow, & painful grind to the finish line. A course that would either make or break ones result.

I was super relaxed before the start of the race. There's something about lining up in transition with all the amateurs that comforts me and pipes down my nerves a little. I was also relaxed by the fact that with such a strong startlist tantamount with my inexperience in the format, I realistically couldn't expect much of myself. Irrespective, I still knew I could grab a red hot result.

I took to the lead early on in the swim, but was passed by Andy Potts after about 500-600m. I sat on his feet at a steady pace, but the whole time being well aware of his average sighting skills. Coming down to the last 300m, he made an error in one of his lines to a bouy, and I backed myself to swim straight and I edged him out of the lead pretty easily to lead out of the water.

The run to transition was long, and the run out was longer. But all fun nevertheless. I wipped off my skinsuit, put my socks and helmet on, was out the door hitting that first long hill VERY suddenly. It was a nice little challenge and warm up for the legs, and I positioned myself in the pack and got myself mentally ready to play the game. My plan was to just sit in for as long as possible & let the experienced guys take control. About 20km in, people started dropping & I think the first to go was Matt Reed. I knew I just had to stay out of trouble, and I made an effort to bridge a lot of gaps where I could see guys weakening. The last thing I wanted was to be left behind because of some dope not paying attention.

I think about 60-70km is where the action started happening and where athletes were dropping wheels. Just beforehand, Kienle rode through our pack and took off like a Nebelwerfer. I was somewhat humbled by the sight of him gapping up so quickly, but knew I just had to be patient and stick to my plan. The Last 10km is where the vice tightened and I had to start showing some aggression. I bridged gaps over guys and ended up second wheel behind Crowie who was switching the lead with Potts. We were putting the pressure down and gapped the field slighty and really made the other athletes burn their legs heading into the run. I has goosebumps this whole last section of the ride, and was overwhelmed to be riding at the front of the race (bar Kienle the crazy Deutcher) with two legends of the sport. I was proud to have just put myself in that position with as little effort as possible. At this stage I was still quite comfortable and hadn't had to use much gas at all.

I was second off the bike, and probably stole a little glory from the guys that worked the most, but I didn't care. I need the exposure more than them and I really didn't have to think twice about snatching it! I was also second out of transition and led the run pack for the first km or so, a pretty stupid move a stary eyed novice like me would make. From here, I was overtaken, and kept going backwards to 6th place, where I stayed for the entire run until the last 10minuntes where I got done by Bart the Belgian bullet. I was feeling strong most of the run bar the last lap. I went into a daze and started making weird noises that I didn't know how to control. I'm sure there's others reading this who've had similar! I has Faris Al-Sultan on my tail and he kept the pressure on me all the way to the finish.

I'm overjoyed with 7th, and will definately be back stronger and faster next year to improve on this result. This is my kind of race, and I can see myself developing a kinship with this course over the years to come. I was the youngest and maybe least experienced in the field by a fair way, and stuck it to a lot of pros more seasoned than a Texas BBQ. Bring on Las Vegas 2013, and I hope some of you readers come out with me to join in on the ritual.

Cheers for the support, it never goes unnoticed. My main race kudos goes to Sebastian Kienle. This guy is a space traveller and was on another planet that day. Sincere respect. 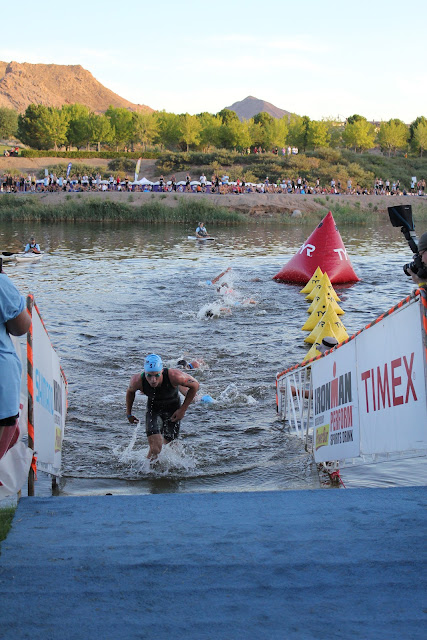 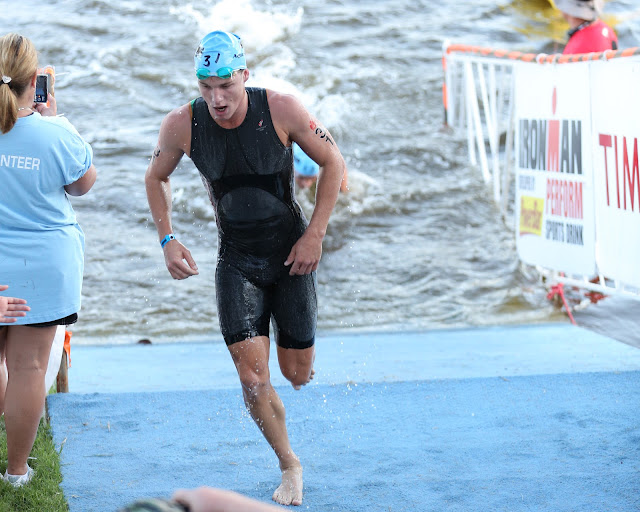 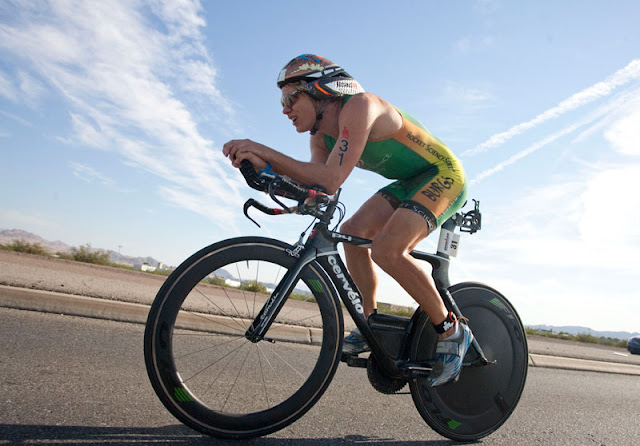 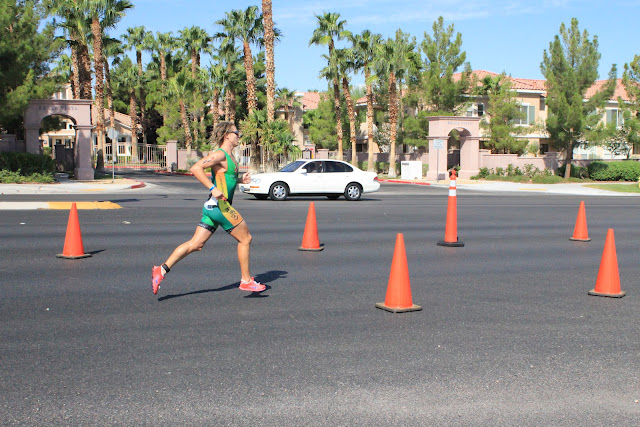 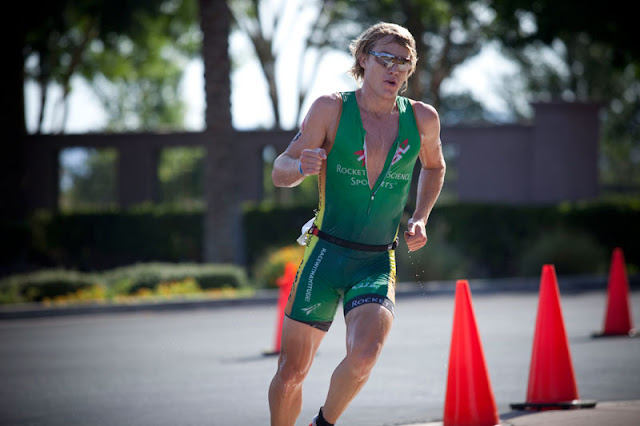 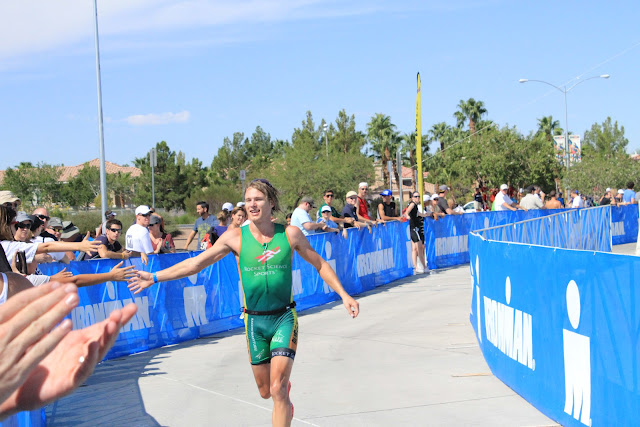 Last year I wrote about this race in a bittersweet way. I won a shit load of cash by leading a 3xlap, 3xprime swim, but I finished with an embarrassing result. I've got a smile on my face to say I reversed those fortunes in this years edition of the Hy-Vee 5150. 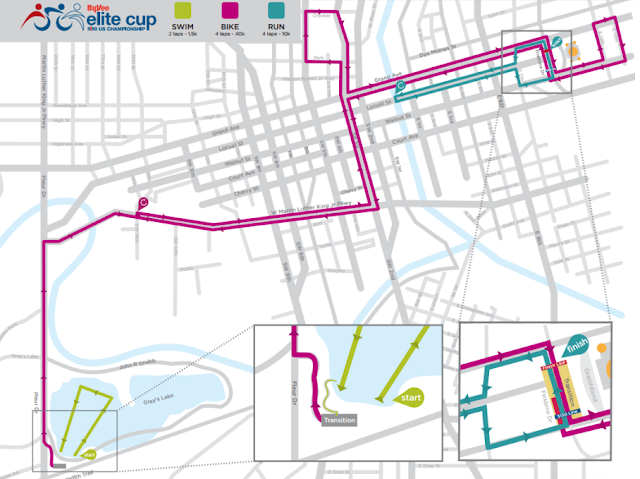 A very untypical course for a non-drafting Olympic distance. More ITU in nature, a lot of corners, obligatory u-turn and some punishing asphalt inclines to weather the body and drown the soul.

Swim- The new course had me yearning for a return to last years river swim. In the week before the race, they relocated the swim from the river in the middle of town to a static lake, removing any challenges we were to face in the river. The river swim in Des Moines is next level; fun and hard. But the Mid-West drought has left the river depleted and uninspiring for the race directors. Two laps instead of three laps meant only two primes were on offer this year.

Bike- The bike course is next level. As said, 18 corners a lap x4 makes for a hard course, especially with some good kickers thrown in. A course of this natures takes the advantage for the typically good strong riders like Cam Dye, and hands the advantage to the technically capable. Throw in some wind, some shitty tarmac and a brutal strong field, this is the leg that would make or break any athlete.

Run- Slow and hard course. 4 laps, with hardly a flat section on the course. You're either running steep down, steep up/down, or up/down 1-2% grade. How strung out the field was by the end was testament to the challenge of the run.

Conclusion- a course worthy to hold a championship race, but the river swim is always a treat.


This is a big money race. This is what I've trained for all year, focused on all year, and I sure as hell wasn't going to walk away with last place pay cheque. There's two ways I can make money at this race. Blast every prime worth $5,150 each (10 on offer), and hope to finish the race just to collect the primes. The other way is to go for one or two primes, but save myself for a good result. I tried the first option last year, but despite making $20,000, I wasn't really happy. A good result is what I was after.

I knew I was swimming well, so I went about my business getting to the front and showing my chops for the first prime. I got to the line first, but was swimming scared that someone would out sprint me. A few guys were talking shit before the race about these primes, and maybe someone wanted it more than me, you never really know.  The second lap was a different story. After the 30 second run in between laps, I dove back into the water a little more depleted than I would have liked. I was happy conceding the the next prime to the willing to save my body for the rest of the race. Gomez took the lead and I settled in third. The second swimmer (Dye? Not sure) ended up dropping Gomez' feet before I realised, and I didn't want to bust myself chasing down a gap that we would get back on the bike.

I took to the lead on the bike early and tried to consolidate, but Ben Collins pulled me in, and with 10 or so guys swarming like Charlie to avoid stagger violations, I knew I just had to sit in the bunch and stay clean. A few guys blew off the front on the ride, Benno, Barney, D. Thompson and Ben Collins sporadically got away. I was riding with a lot of good runners, but wanted to stay cool and save as much energy for the run. I knew the hard bike course would be sapping the weaker guys every second, so I just wanted to continue with my own race.

I was right about the demands of the bike leg, and a lot of guys little triathlon bones crumbled early on in the run, maybe even before the end of the blue carpet. I felt good coming off the bike, and wanted to capitalise on the other's tired legs. I even ran in front of Gomez for all of maybe 10 seconds,and thought I was awesome running with Alistair until I realised he was just having a bad day. I felt strong the entire run, but never really had enough pace to run up to 6th. I finished in 7th, in what is maybe my best complete race ever against the best non-drafters in the world.

Hard work certainly pays off, and even if I have shit results for the rest of the season, it will still to me be a break through year. A professional pay cheque in the bank means more motivation for next year, with bigger dreams and bigger plans. A special thanks to everyone for the support in the lead up to the race, and the nice words afterwards. I like everyone who cares to feel a part of my journey, and always know that every detail in the tiniest never goes unnoticed. I'm a lurker and see everything :)

And of course, eternal thanks to Hy-Vee for the world class event. There's only ever good reports from this race, and it's with good reason. 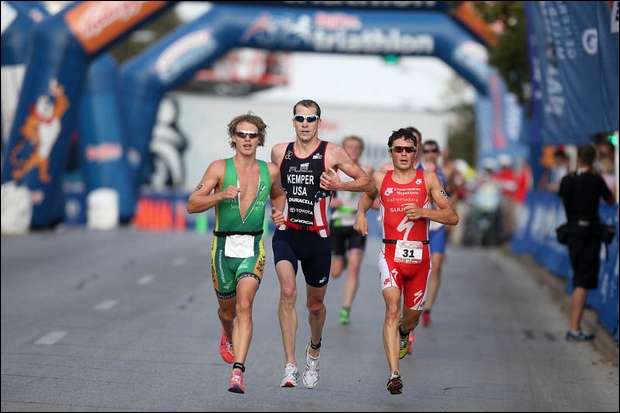 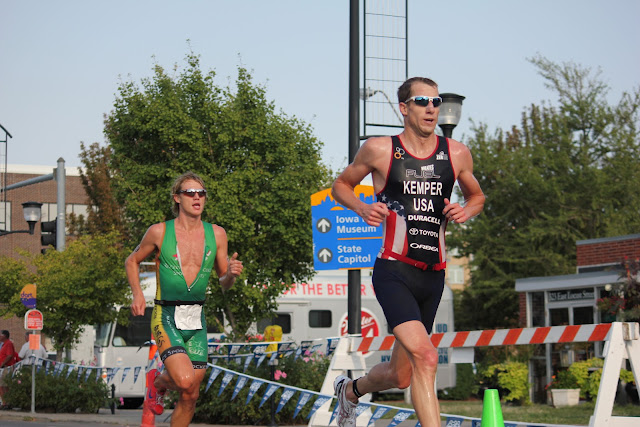 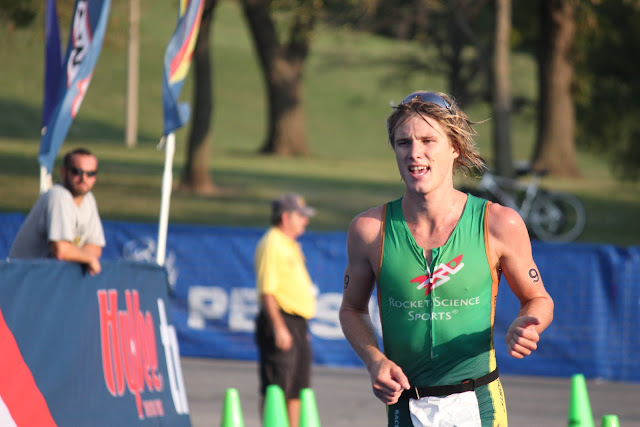 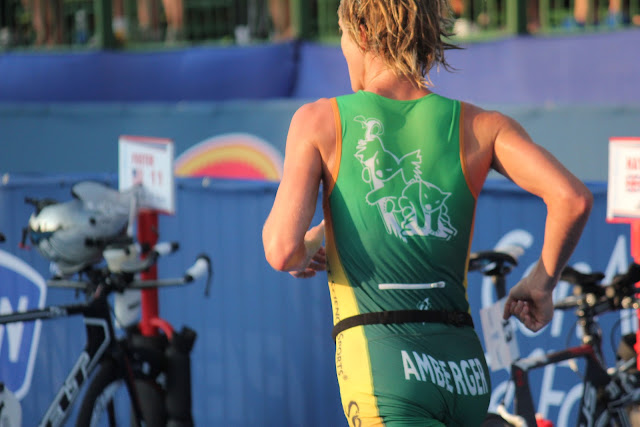 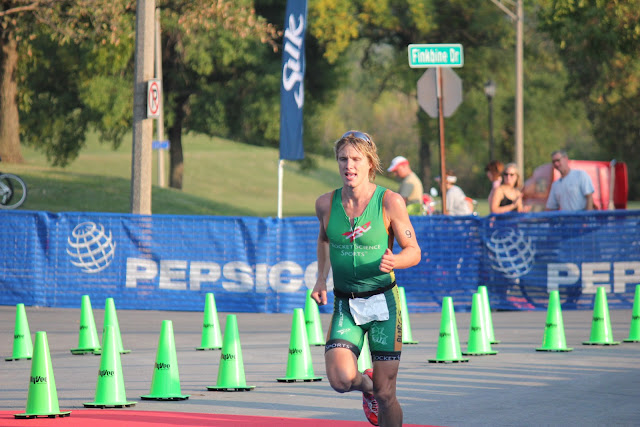