Time to get back into the blogging after a long mid-season blogattical. It seems to happen to everyone right!

On Sunday I competed in my only European race for the year, and probably the second most important race  for me next to Las Vegas. It was the European 70.3 Championship held in Wiesbaden, just East of Frankfurt. I'm told it's where all the rich Frankfurtans live if that makes sense, or where the rich Wiesbadens who work in Frankfurt live. Anyway, it was an neat little place to visit, and only 15minutes taxi ride from Frankfurt airport if your driver shows enough zeal on the Autobahn.

I flew in on Friday from Vitoria (Spain) after completing part 1 of a heavy pre-Vegas block. I was a little fatigued on the start line, but made sure I had just enough freshness to be competitive in the race. Wiesbaden is notorious as being one of the hardest courses around, specifically the bike leg. It would be pointless to line up in such a competitive field only to deliver a sluggish performance. My main motivations behind starting the race was to race a field and course similar to what we will see in Las Vegas. The swim is a good change from the normal out and back course. There's a lot of corners to break the pack up and string things out. The only thing holding this course back is the 23c water temp, making wetsuits legal. WTC really needs to mature on this rule, 24c limit on wetsuits for pro's is embarrassing. I'd say the gaps in the field would have been a lot bigger if wetsuits were ruled out for this event. 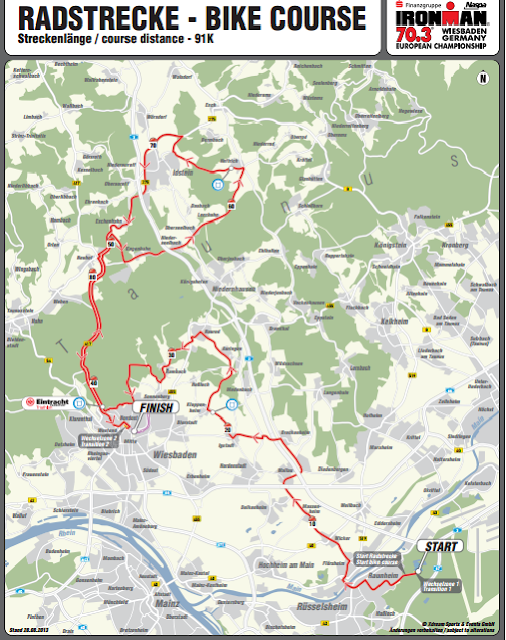 The bike course is legit. The first 40km is mostly flat & rolling, with the next 50km massing up 1,500m of altitude gain alone. The whole course adds up to 1,634m (5,361ft). Tell me another 70.3 course that matches this, Las Vegas alone only tips over 1,000m of gain. When you're not climbing, you're descending through tiny towns and around hairpins corners. The longest climb was about 15minutes long, and you can view it as the one split in my data. I had no idea where I was going the whole business end of the course, most of it remains a blur, just following the wheel in front of me. 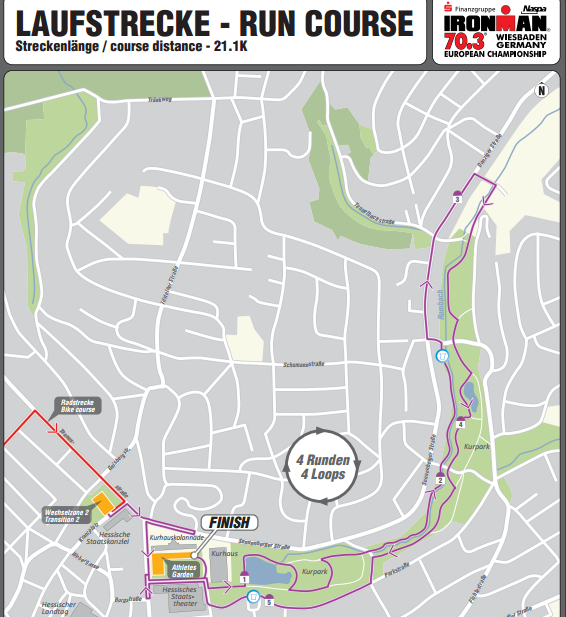 The run was one of the best courses I've done. Four laps is a good number for starters, and most of the course is on hard packed gravel and some asphalt road. Almost the entire course is shaded, and it's a nice 1-2% gradient on the way up and similar on the way down. There was also lots of crowd to keep everyone going!

It was a deep water start to kick off the day. I like a deep water start, I'm normally pretty good at them but was a bit sluggish off the line and settled in third from the front. The pace was solid, so I didn't feel a need to swim up to the front once I settled into a rhythm. This was a good thing because my swim cap fell off after a few hundred metres and the rest of the swim looked something like this every time I breathed or tried to sight 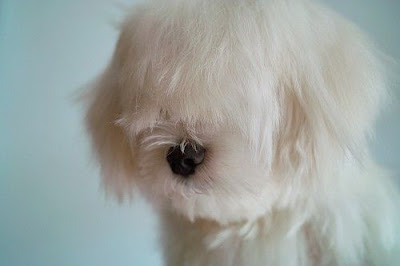 My transition was shocking, I couldn't find my swim bag on the race to collect my gear for the ride, and I fumbled for a good 10 seconds with a careless wetsuit removal. I was #59 so finding my bag gave me grief in both transitions on the day. I started a ride a good couple hundred meters behind the pack so I had to dig to catch early. I think this took a little out of my legs and I had a hard time finding a rhythm most of the bike. We passed the 40km marker, still with the front group intact (Vasiliev brothers, Jan Frodeno & Matt Chrabot) but I thought things were improving. I was wrong! I was the lead wheel and we just began the ascent up a long 8km climb when Sudrie Sylvain came storming past. I knew he was a strong cyclist, so I hoped he bridged up to the group solo. I soon looked around and saw this exact view (probably seconds after this shot was taken) which was very disheartening. 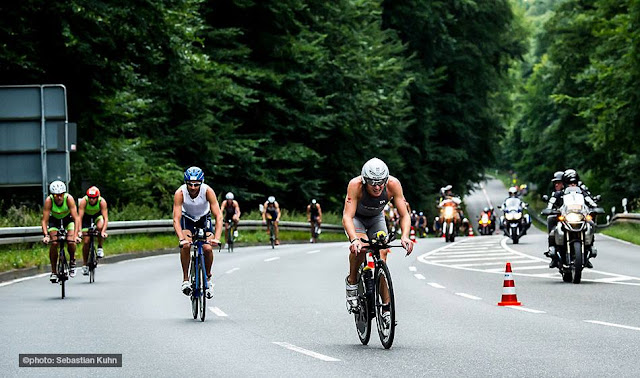 We weren't blazing up the front, but we weren't mucking around either. It's just that when Sebe Kiele is racing, the whole dynamic changes. I think because conditions were very cool (around 17c / 60f) and the first 40km was relatively easy, a lot of athletes were able to latch onto him as he went neberwerfer up to the front. From this point until the end, the front group remained large, and the stupid hard course almost worked for the group instead of stretching things out. I think because the ups ad down were so frequent, athletes could sit in and recover for the next surge of pace. Athletes did drop off, but not many, and most of the key runners were left intact in the group. I though I must have been one of the weakest runners up the front, so I was happy to sit in and conserve as much as I could, which still wasn't much when Kienle is driving. The guy is just amazing. My ride data is here if anyone wants to look (race weight about 65kg).

Just before T2, we climbed and descended the 8km beast I mentioned earlier, and I think this is where the group split up the most. Beginning the descent, you could easily spot the guys who weren't confident on the downhills and were beginning to drop wheels. I did  my best to tuck and quite easily made my way up to Kienle's wheel, topping out at 96kp/h (60mp/h), and hitting T2 within seconds of the leader. I was happy to be up the front at this point in the race, but I still didn't rate my chances for a medal or good result considering how many good runners I was up against. Be sure though that I wont be writing myself off this like this again.

Another fumble in finding my gear bag ensued but I quickly got my shoes on and was out the hatch with my mind focused on running my own race. Athletes were going blazers all around me, and Ritchie Nicholls looked like he was setting off for a 5km track race. Coincidentally, his fastest 5km lap around the course was clocked at 15.44, so it wouldn't surprise me if this was recorded on the first lap.

My legs felt good, but not great. It wasn't until I completed two laps that I felt I could begin lifting the pace, and once I did, I was catching athletes quickly on the uphill segments. I've been doing a lot of shallow hill reps specifically for the Vegas course, and I think this worked to my advantage in Wiesbaden. I was in 7th, then 6th, and by the last lap I could see 5th place in my sights. All the while, athletes were blowing up everywhere and the chasers were getting fewer by the lap. The only athlete running through from the second bunch was bike/run stud Boris Stein. I caught 5th within a couple of minutes after targeting him and then out of nowhere I saw Kienle, and ran up behind him within another couple of minutes. I must have been negative splitting the shit out of this course because I never run through the field! It felt like a career highlight passing Sebe, and at this point I was 4th with only 2km to go. I held my gaps until the finish and celebrated like a German in the month of October all the way to the line.

I couldn't be more thrilled with 4th in my first European Championship 70.3, and my performance on such hard course. From here, I'll work on my recovery and then do a final short push into Hy-Vee & Las Vegas. But all things are looking in check for the big tests, and I'm more motivated than ever to test myself at the World Championships. As always, thanks everyone for the support and please check back leading into the big one to see what I'm up to before the big day! 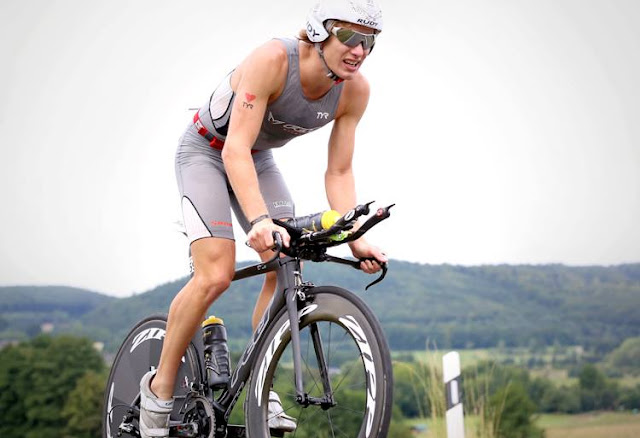 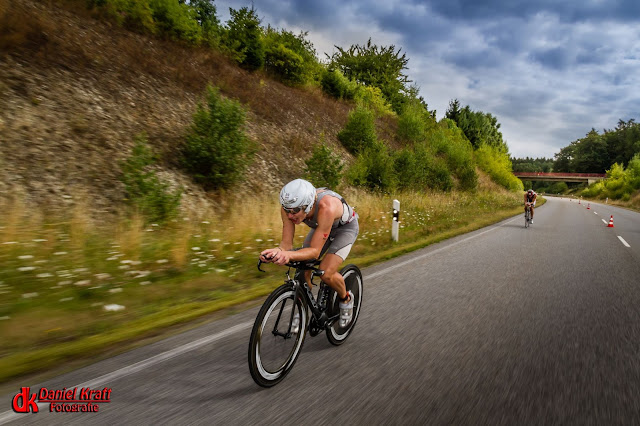 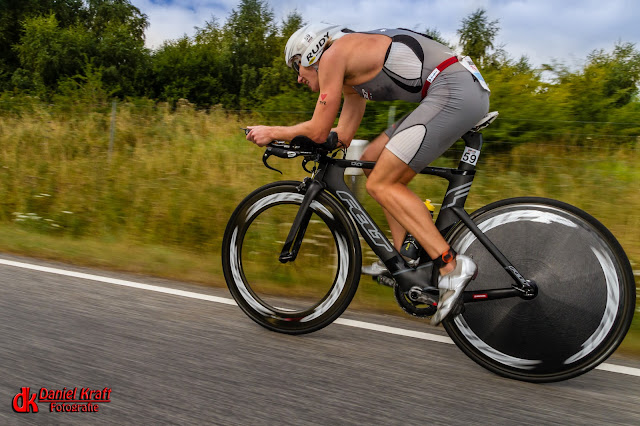 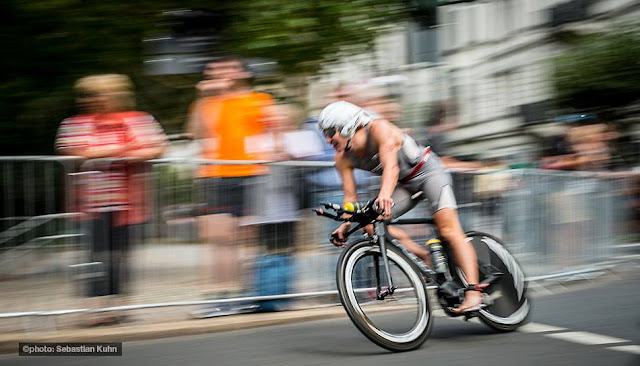 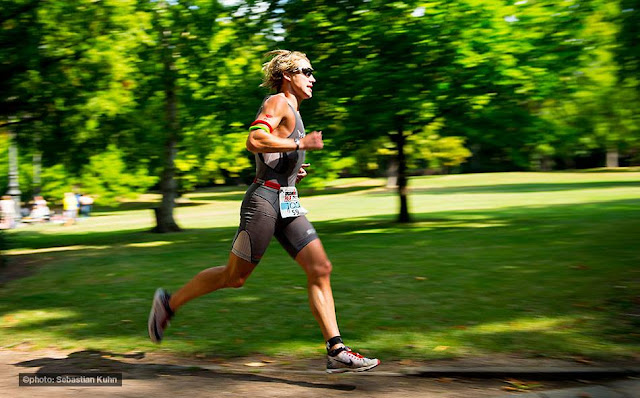 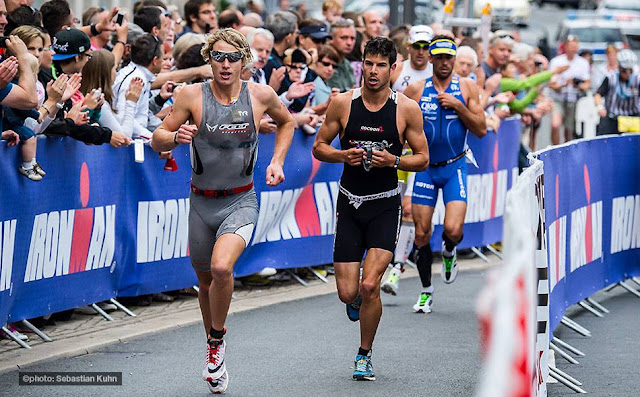 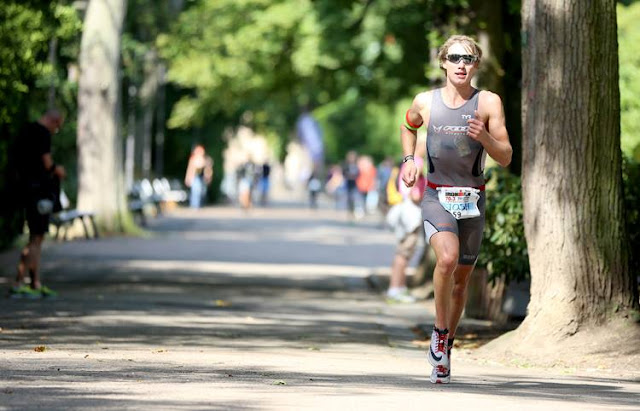 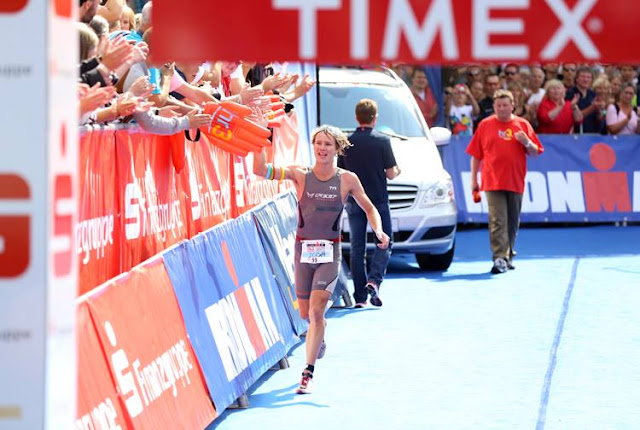 Photos available thanks too...