Lucifer owns this set, for real...

Part of today's warmup in the pool, the lazy 666 KICK set.While I'm not running, why not destroy my legs :) 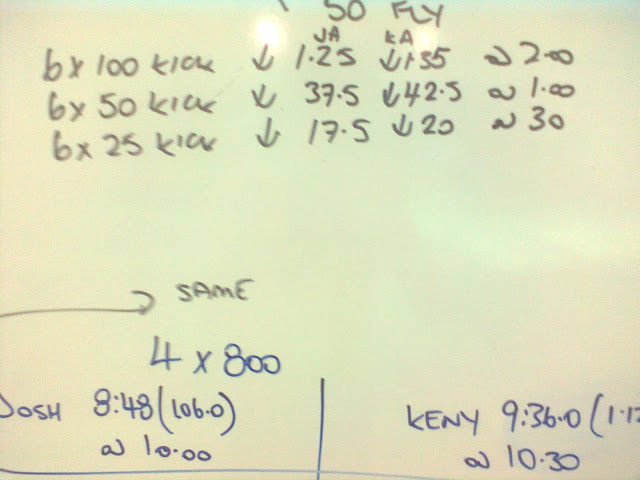 were on the road this morning.

Choice session with Jimmy 'always seems to score older chicks'  Seear who is recovering from a broken collorbone sustained back in December. It was his first ride on the road bike, on the road since the crash. Hats off to us injured folk.

Posted by Josh Amberger at 1:59 PM No comments:

Interview with Slowtwitch!
Posted by Josh Amberger at 5:47 AM 4 comments:

Yep, my city and my state is underwater.

I'm a fair way out in the suburbs and away from the river, so I'm safe. Unfortunately, a lot of others aren't.

I went and did some flood recon on the bike today in the CBD, and the extent of it is mind boggling. I don't have much to say, but the last few mornings I have been waking up thinking it's all a dream. Then I turn on the TV and there's morbid disaster on every channel. If your not local and want see what's happening, shuffle through the videos and news on this site, or do your own research on youtube. It's not important considering the lives that have been lost, but a lot of my training grounds are underwater, including pools, bikeways, roads and running paths. Most of the structures have just floated away. Think of where you train, and now think of it being 5meters underwater. As I said, it's mind boggling.

On this Garmin map above, click the aerial button in the top left, and the end of the red line is where I live. You can see the green mountains behind me to the West. This is what's stopping my area from flooding, but causing the city and surrounding suburbs to flood. Shuffle around  on the map a bit, and you will see the Brisbane river meandering all the way around behind the mountains, until it hits a huge dam. This is Wivenhoe dam, and it's running at 190% capacity. The satellite imagery of the dam you are seeing was probably taken about 2 years ago, when the South East was in a diabolical drought. When we were in the drought, the dam got down to about 12% capacity. So see the dam, and imagine it about 18 times bigger. The reason our dam is flooded is because all the water from the inland floods ended up in our dam, down our river and now of course, in our city. Even the roads around the dam which I do long rides along are under. This loop that I posted about a month ago is now completely underwater once you descend the mountains (you can see Wivenhoe dam behind the pictures of the mountains). Yep, even the Moggill Ferry (that I joked about having to use on a ride) had to be sunk to prevent it from becoming a huge missile floating down the river. Whilst I did the city flood recon today, me and two friends did a Wivenhoe flood recon yesterday, and drove the same way over the mountains as I rode. Here is what we tragically saw.


Landslides covered huge sections of road descending Mt. Glorious. The branches had been cut only hours before as people were trapped at the bottom from the rising flood waters. 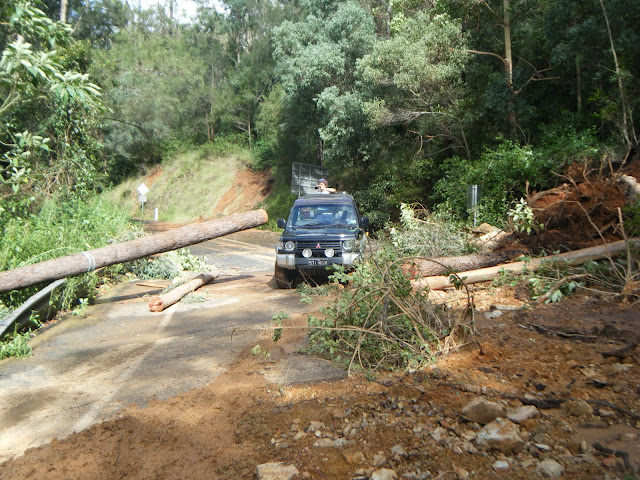 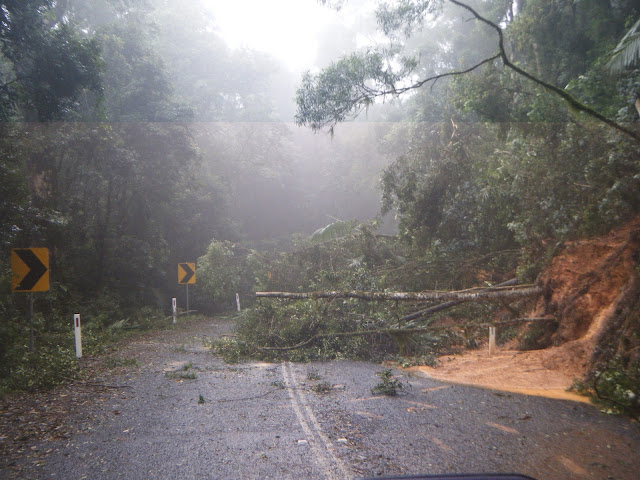 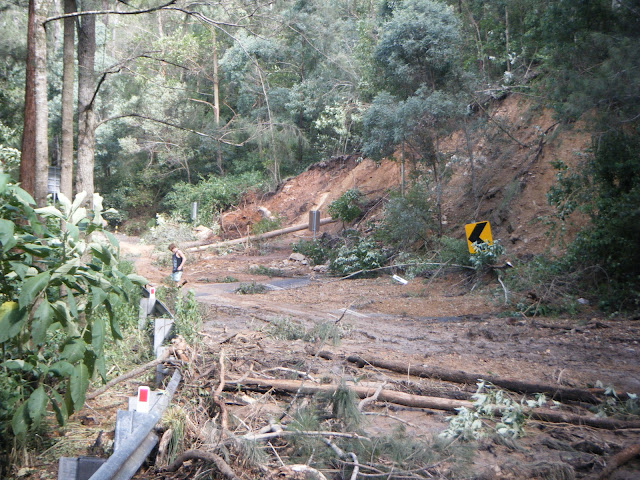 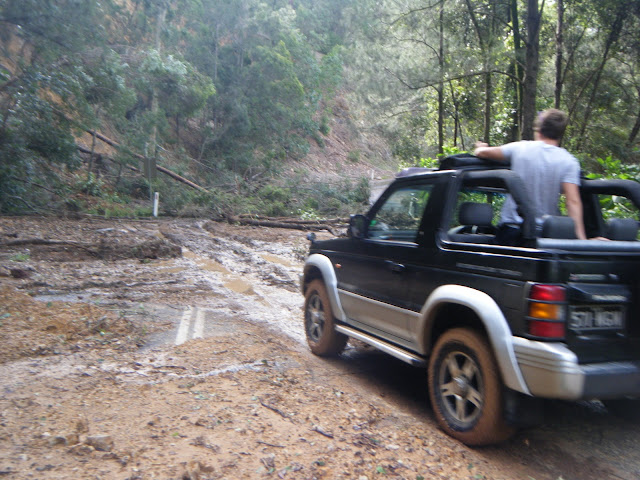 Most of the water causeways had been savaged. 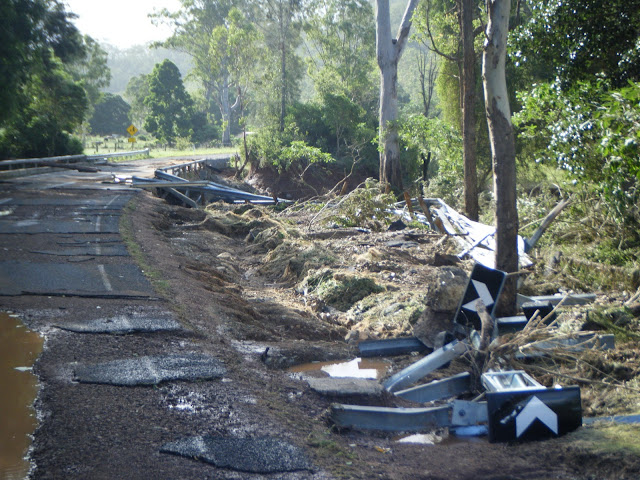 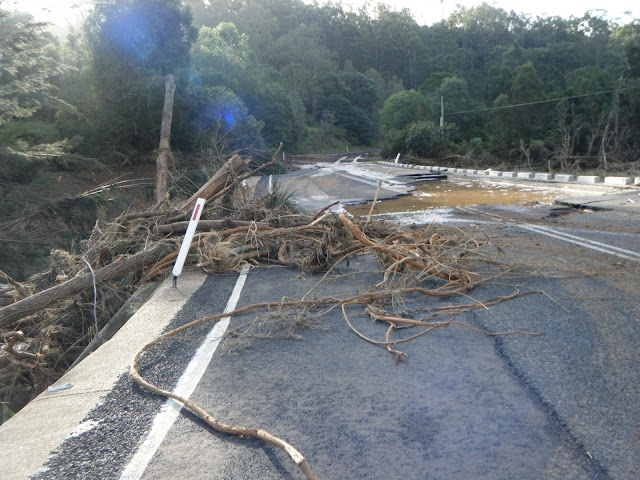 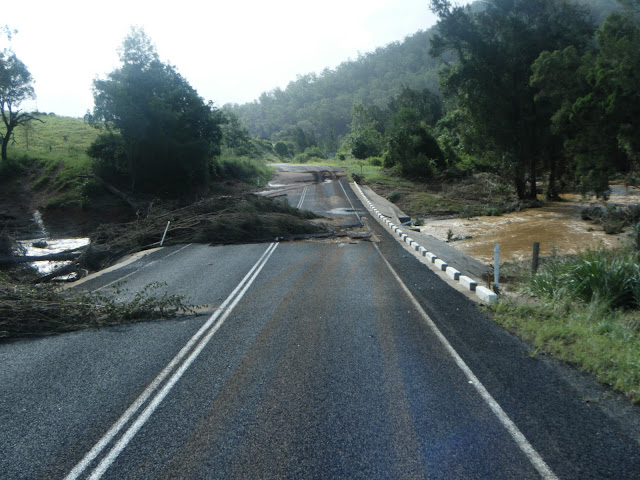 This is Kipper's Creek. Under the water there is a bridge, which stands about 30 meters off the ground. 2 years ago, the people on our ride can verify there was no water here at all, now it's all under. 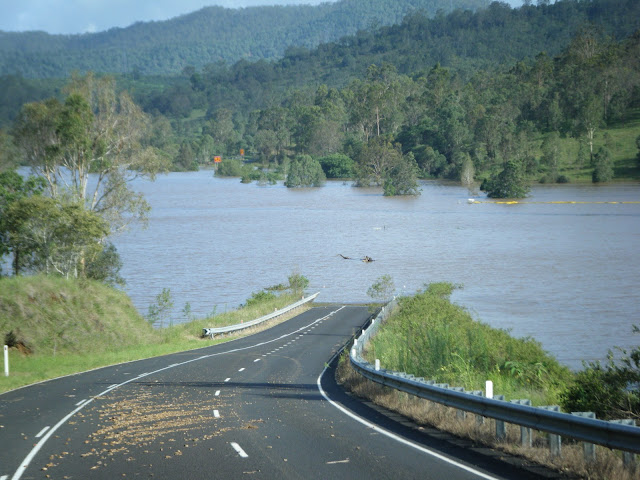 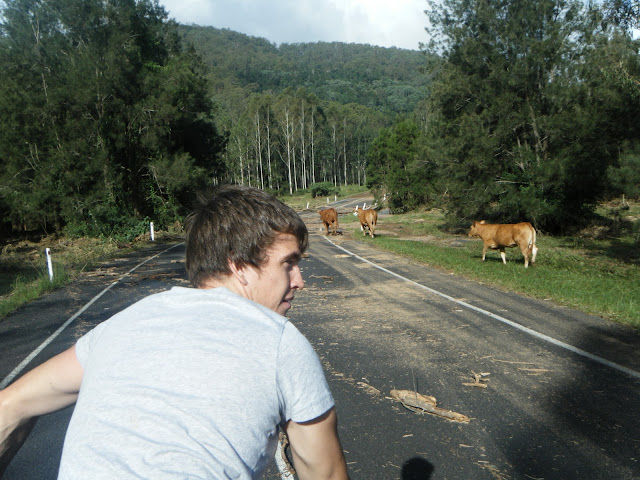 This big hole you see here is supposed to be a driveway. 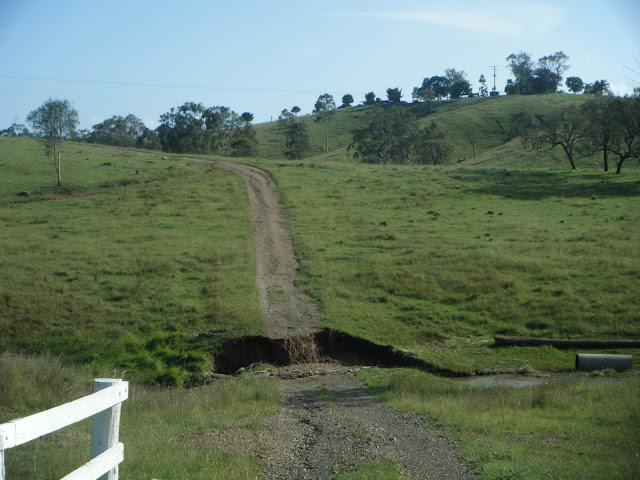 Water marks on a park bench. 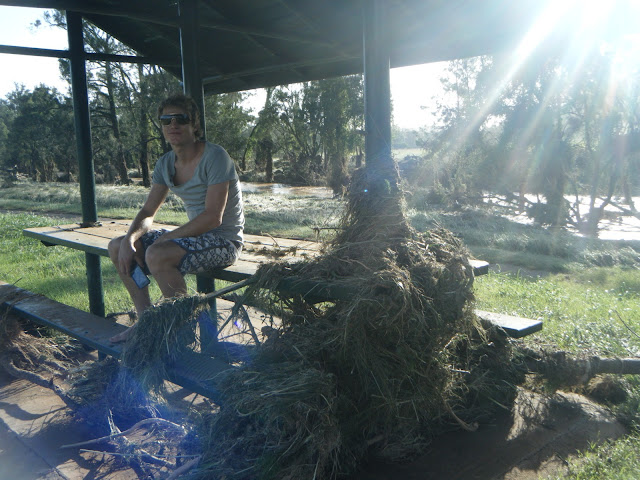 A lonely car, luckily with no one in it. 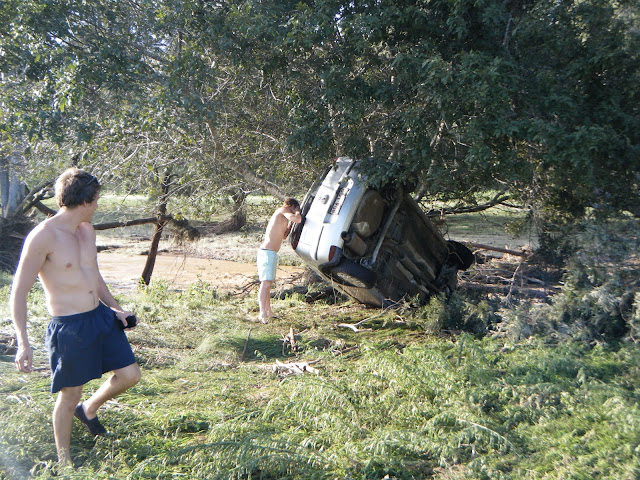 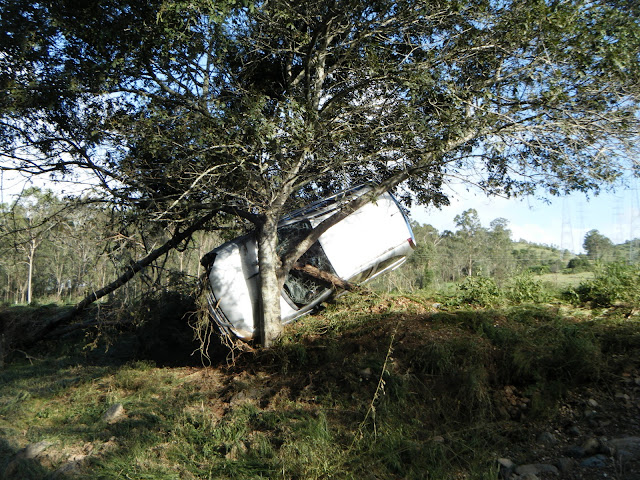 And I even had to rescue a poor bugger from the mud. 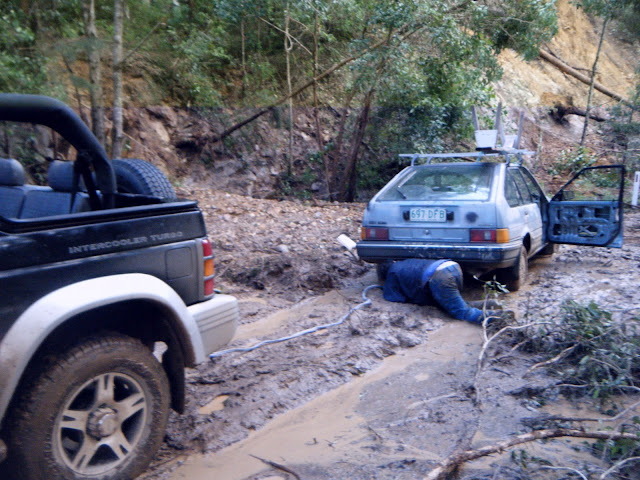 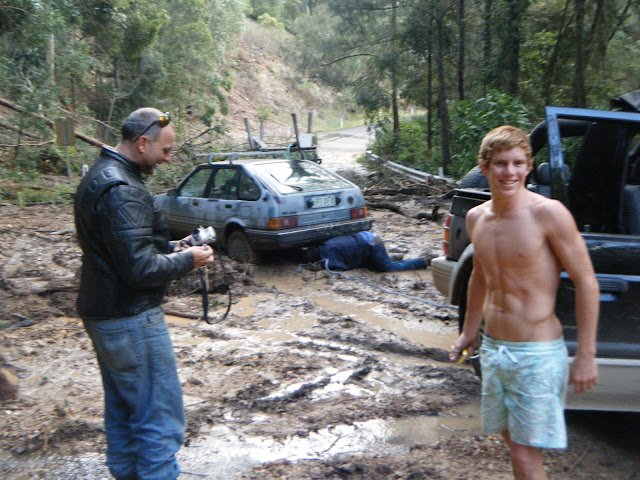 And here's some obligatory pictures of the waterways on the mountains that I love. 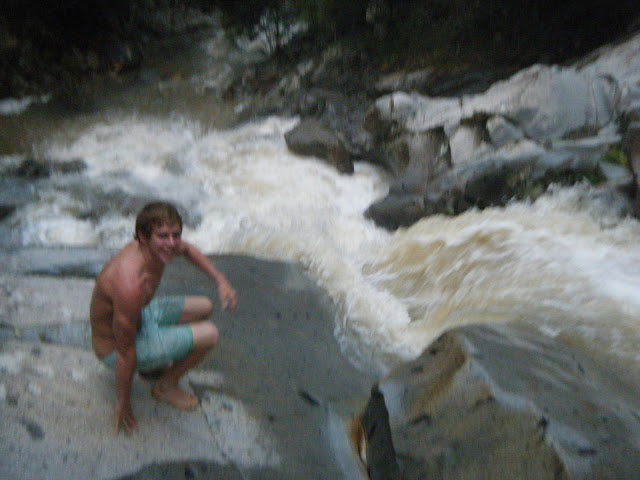 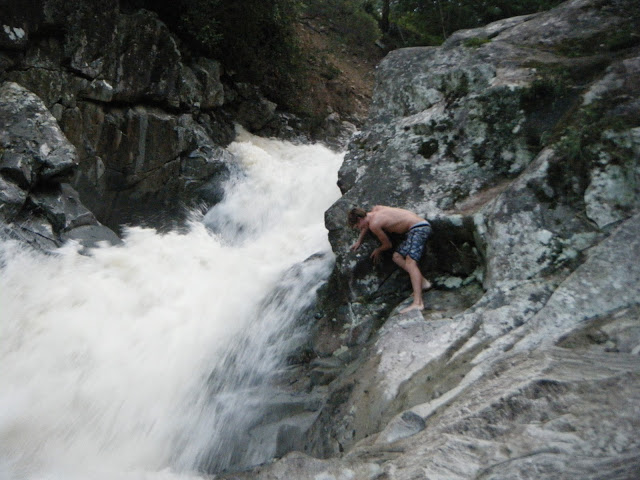 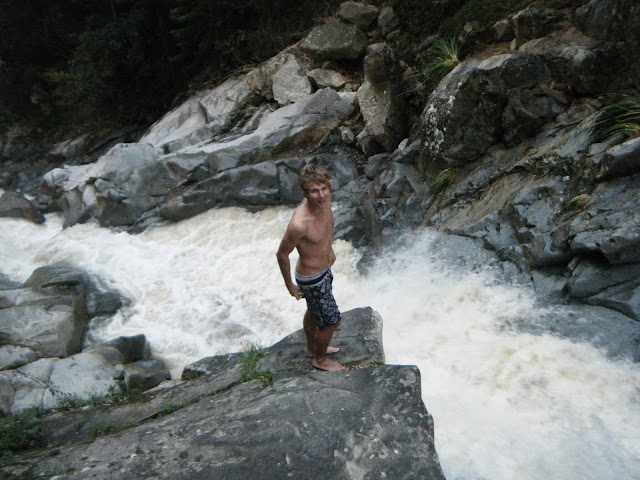 I hope all Brisbane and QLD residents continue to stay safe, and let's all pitch in for the clean up effort that is imminent and dawning. Let's hope no more lives are lost, and that all the missing people are recovered. If anyone would like to donate to the Premier's Flood Appeal, please follow this link.

I've been in a catatonic state the last few weeks with a niggling achillies, but it's not so bad, the weather here down under would eventually send me catatonic anyway.

This is Burleigh on the Gold Coast today, windy, rainy and quite dreary! 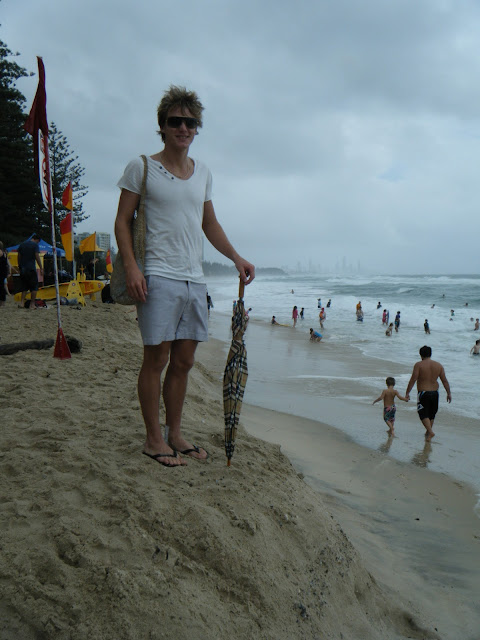 I'm on the upswing though, and should be up and moving about this week.
Posted by Josh Amberger at 10:45 PM No comments: