My preparation for Auckland is almost complete, and I'll race this Saturday in my final chance to take an U23 World ITU title. This will be my second World Championship this season (Las Vegas 70.3 being the first), and my first start in an ITU World Championship since 2009 on the Gold Coast.

This has been somewhat of an awkward race to prepare for. Firstly, I haven't been racing ITU consistently since 2010. Secondly, it's right at the bookend of the season. It doesn't take a genius to understand the different training approaches needed to be at the top of either non-drafting or ITU at any given time. I've been training to race non-drafting pace all year, and suddenly at the end of the season, I need to train to handle high intensity lactate coming-out-of-the-ears kind of stuff. But this was a fantastic opportunity to be given, and I am really pleased to have taken it. And while I've had to sacrifice a chop at the Australian 70.3 Championships in Mandurah (also held this weekend), I wouldn't be racing if Auckland was going to be typically won by an athlete that can win it with run speed alone.

While I can say it's a difficult event to prepare for considering my circumstances, I can also say there's a few things about this race that play into my hands. The biggest positive for me is this course is brutally hard. 8 bike laps with stinging climbs (course elevation profile here) will literally be served cold throughout the race. If it's a tough course with frightfully hot or cold conditions (very cold in this case), you can bet I'll always be one of the last ones standing. Secondly, there's no one that's going to find some magic new level of form at the end of the season, and I've come into my training knowing this. For me, the base endurance is omnipresent from my non-drafting and 70.3 training, which will always put me over the line in any hard short course race with a tough bike leg. So while I don't have a large capacity of ITU-specific training to draw on, I know I've got an enormous bastion of mental strength and base endurance that the others competitors might not have. I haven't been trying to cram lots of lactate or speed work in, but rather just putting in little parts to refine what my muscles and energy systems can adapt to in the time I've had available between Las Vegas Worlds and now. I'm confident that I'll still certainly have what it takes to be competitive, and with no expectations, I might very well surprise myself & others.

I'm not on this Australian team because I've done a huge amount of ITU races and ticked all the seemingly endless selection boxes. In fact, I haven't done a single thing the policy requires. Moreover, I was picked for the team because I'm on-form, It's that simple. So I'll put this feather in my cap and accord myself not to leave anything out on the course come race day. If I get a good result, that's fantastic. If it doesn't work out, I'll have no regrets. At the end of the day, I've earned my satisfaction at both Hy-Vee and Las Vegas, so more results are a bonus.

Now, the only decision I have left is to choose what race flats to wear? I might need some help on this one so leave your feedback below! Flyknit or LunarSpider? 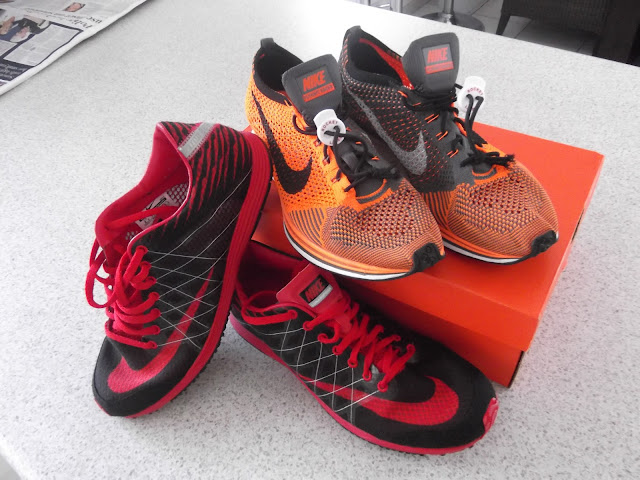 An interview from the race and a short race production video, thanks to Verdict Media! (the embed codes don't work for some reason so you'll have to follow these links to watch)


I'm currently preparing for the U23 ITU World Champs in Auckland New Zealand in a little over two weeks time. I've come up really good from Las Vegas, strong an uninjured, and very motivated to race at another World Championship. The format isn't something I've obviously dedicated myself to the last couple of years, but it's the style of racing that I'm blooded in so I'm confident I'll still be competitive, especially considering the brutal strength based course. Running a quick 10km with the top ITU guys is a little out of my depth at the moment, but I can certainly grind out a strong run like in Hy-Vee & Las Vegas 70.3. Though the bike leg will be my weapon & the course is certain to bring more pain than a Cold War era Rambo trilogy. Stay tuned!
Posted by Unknown at 9:21 PM No comments: